While agculture is able to supply all Atom Jet Agriculture products to the Australian market, there is little doubt that their range of rugged and durable seeding openers are our most popular Atom Jet product sold.

The Atom-Jet and AG Schilling & Co relationship started over fifteen years ago, with Mark looking to shift away from conventional seeding systems and deep ripping knife points predominant throughout the southern Australian grain belt. Conventional sowing systems were resulting in excessive moisture lost post seeding and the narrow deep ripping knife points which were showing positive yield responses in other areas were not practical in the limestone filled Yorke Peninsula soils A.G. Schilling & Co farmed. Mark’s desire was to find a seeding point which would conserve soil moisture while withstanding the constant hammer of rocky soils. After researching his options A.G. Schilling & Co ordered their first set of Atom-Jet openers for the farm in 2003. What he found was that not only did the openers give him the No-Till practices he wanted, they also were very accurate at placing seed and the durability was second to none. This was reinforced by the Atom-Jet Guarantee proving the confidence in the product.

2018 AG Schilling & Co has expanded with a new company, agculture, to pursue and prosper with exclusively dealing with Atom Jet in Australia.

Seed and fertiliser placement options include:

Atom Jets can be fitted to the following tine configurations: 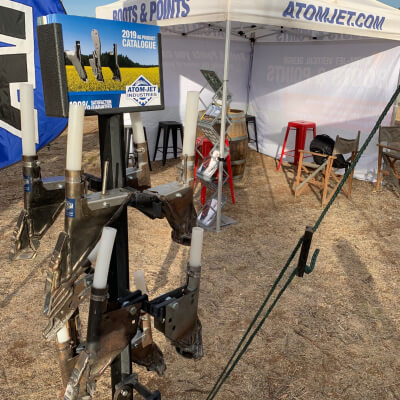 Grain farming production systems continue to evolve within Australia and with this our machinery must evolve to support this. Started by AG Schilling & Co and now continued by agculture is a commitment to assisting Atom Jet with focus areas of R & D to provide our Australian clients with the best possible equipment solutions. Atom Jet in partnership with agculture and supported by independent farming businesses across the Australian grain belt will continue to develop products for Australian conditions.

Agculture & Co and Atom-Jet remain committed to providing quality product to Australian farmers backed by a strong guarantee and look forward to developing product to meet the ever changing seeding needs of farmers across the globe.


Atom Jet products can be purchased directly through agculture or contact your local dealer within Australia.